Crigler-Najjar syndrome has been classified into two types according to the degree of hyperbilirubinaemia and to the response to phenobarbital administration.

The more severe Crigler-Najjar type I (Online Mendelian Inheritance in Man #218800 ) is characterized by severe chronic non-haemolytic unconjugated hyperbilirubinaemia with high levels of serum bilirubin (between 20-50 mg/dL) due to the absence of bilirubin B-UDPGT (UGT1A1) activity.

In the milder Crigler-Najjar type II (known also as Arias syndrome) (Online Mendelian Inheritance in Man #606785 ), bilirubin UGT1A1 activity is only decreased and a consistently significant reduction of hyperbilirubinemia is obtained with phenobarbital treatment, which does not occur in Crigler-Najjar type I. The response to phenobarbital may represent induction on the residual UGT1A1 activity present in type II patients.

Clinically, Crigler-Najjar type I and type II syndrome are discriminated on the basis of the following clinical criteria:


In an autosomal recessive inheritance two copies of an altered gene located on one of the autosomes (that is, not the X or Y chromosomes) must be present for an individual to be affected with the trait or condition determined by that gene.
- An affected individual (homozygote) has two parents who are unaffected but each parent carries the altered gene (heterozygote).
- The risk of two heterozygotes, or carriers, having an affected child is 25%, 1 in 4, for each child that they have; similarly, there is a 3 in 4 chance (75%) that each child will not be affected.
- Males and females are at equal risk for being affected.
- Two affected individuals (homozygotes) usually produce children all of whom are affected as well.

Autosomal dominant inheritance is marked by the primary feature that one copy of an allele is sufficient for expression of a trait; the gene located on one of the 22 autosomes (that is, not the X or Y sex chromosome) is expressed in the heterozygous state.
- Each affected person has at least one affected parent. Exceptions may occur for one of three reasons:

Other characteristics of autosomal dominance:
- An affected person has a 50% chance of passing the trait to a child.
- Males and females are equally likely to be affected.
- Two affected people can have an unaffected child. 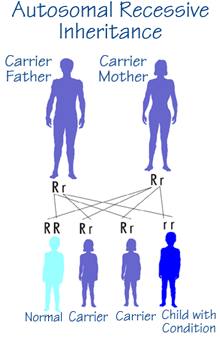 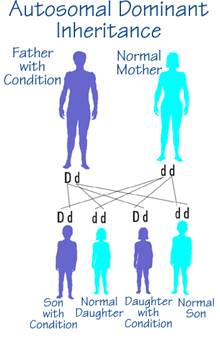